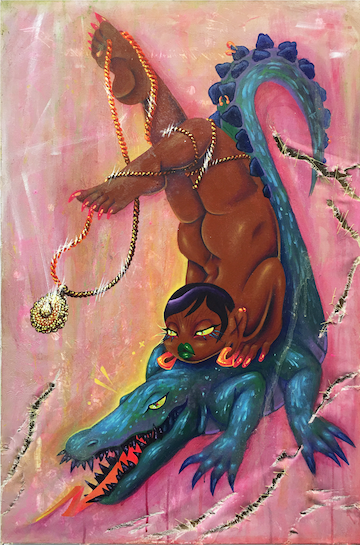 In this piece, a woman elegantly holds herself in a handstand-like position on top of an alligator with a gold chain wrapped around her legs and ankles.  This chain dangles in front of the alligator’s face, perhaps to spur him on, similar to a dog being enticed by a bone. The woman looks relaxed and sports a slicked down pixie cut as well as matching neon orange earrings, fingernails, and toenails.

This piece, Gargoyle #2 is an accompaniment to Gargoyle #1 situated in the gallery to her left. She is one of Rixy’s protector characters akin to an evil eye, meant to look after her and ward off enemies. The Gargoyles are Rixy’s final works on canvas, as she was becoming fed up with this material and found more freedom in cardboard and other substrates and surfaces that carry stories.

On the bottom right corner and right edge you can see the canvas has been scratched as if the alligator has been wreaking havoc. The rips are stitched up because they started to cave in too much, and this is just an example of how Rixy is open to adapting her pieces, she calls experimenting “half struggle, half reality check”.

For this piece, Rixy used a reference picture of an ancient Roman sculpture of an Egyptian acrobat in the same position atop an alligator from the British Museum. A Roman person depicted an Egyptian person and now the depiction is in London, England, how did that happen? With this knowledge, I start to wonder, Who has a right to tell stories? Art is a method of storytelling and Rixy uses it to authentically represent herself, her friends, and mental state as well as her interests. If you looked at your own life as a story what would you be saying? What characters do you need in your story? What role do you play in your own story?