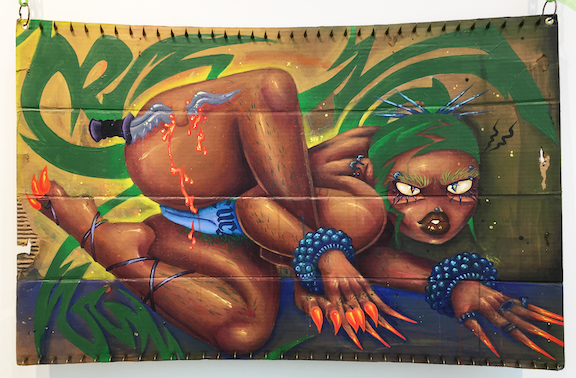 The title of this piece is called The Charmer. Even though the first thing you might notice is how fully exposed the figure is and how her body is crouching in an animalistic position, her sharp gaze demands your attention. It is as if she’s daring you to look with the dagger etched into her body as a warning. However, if you look carefully, her legs have hair, her eyelashes are as long as spider legs, her eyebrows are painted green, and the word “Cúcala” is written on her underwear. The name of the show is “Enter the Cúcala”, which you can’t find a translation of on the internet because it is Spanish slang for vagina. Like the piece, the name of the show draws attention to woman that may not be typically accepted by society’s standards yet is charming and fully autonomous, living for herself. As Rixy has commented in the context of this piece: “It doesn’t matter, even if my legs are wide open and my pubes are coming out of my underwear- even if I look disgusting I can still draw you in.”

I believe everyone can relate to this piece, that there is a power in being able to call attention but retain the ability to say no, and Rixy illustrates it flawlessly in The Charmer. In an interview in which she discussed this piece, Rixy goes into detail about how themes of the body, harassment, and consent are rooted in this painting.

Rixy discusses in the interview an underlying emotion of frustration and anger in the charmer piece, which becomes unmistakable when you regard her tense body posture in the painting. Although Charmer is alluring and confident, she is protective of herself.

What emotions spark when you first view the charmer? Do you think Rixy was able to present this message clearly through the painting?  Have you ever felt like you needed to change the way you look so you wouldn’t receive unwanted attention in public?  Have you ever at some point felt the need to cover up your body because of how society is displaying you without your consent?